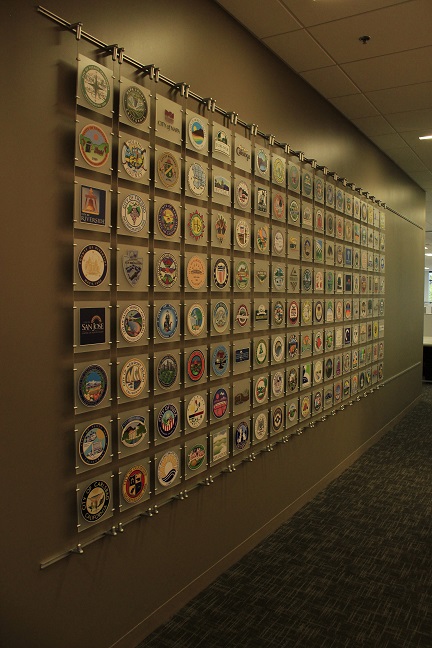 A lobby sets the tone for your business, and reflects your brand image by the decor, lobby sign and graphics.  Having seen our website article on a cable wall system for another client, Renovate America’s HERO Program (located in San Diego, CA) called looking for something similar, but in a larger scale.

We listened to what they wanted, and worked up some designs that would work for them.  The goal was to display each municipalities City Seal that they partner with for their HERO Program.  It was a unique lobby sign display, unlike any other.

The challenge was to display these partners City Seals on the lobby wall that measured 25′ long, with consistently spaced 2″ between each tile and each column.  Since this was a load-bearing wall, studs in the wall could interfere with the precise spacing, we solved with a sliding track system to insure even grid spacing.  The wall system would display 28 columns, 8 tiles each, totaling 224 City Seal tiles.

After proposing different finishes, the final decision for materials was the frosted acrylic tile with matte laminated contour cut City Seal.  As each seal was different, we created proofs to show the custom cut paths for each one.   Once approved, we batch printed, laminated, cut, and mounted each tile with the custom print.

For the initial installation, phase one was for the first fifteen columns.  Each column had two aluminum cables, on which to hang eight tiles — 8″ x 8″ frosted acrylic, 1/8″ thick.  Each column need to be precisely spaced and leveled, suspended on aluminum cables (pulled taught).  Each tile was attached to each cable using tile clips (intricately screwed from behind each tile with allen wrenches.)

As you can see in the photos, it looks awesome!   Additional columns were added at later dates, until the wall was complete.  An expansive lobby sign display with wow factor!

On the opposite side of the door, they wanted to have one column of 5 larger tiles, sized 13″ x 13″ to display the 5 counties.  (See photo)

After seeing this display in person, we received a call from the Western Riverside Council of Governments for this same system (but on a smaller scale for 5 columns) in their lobby.  Again, it came out amazing. Lobby signs can be stylish and unique!

Does your lobby need a makeover?  Do you need fresh new ideas for lobby signs?  Give the design experts at North Coast Signs a call at 760-536-5454.

This site uses Akismet to reduce spam. Learn how your comment data is processed.

At North Coast Signs, we believe in being your one-stop-shop for all your signage needs

Whether you are re-branding, or starting out fresh,
let the North Coast Signs team help

Scroll Back to Top