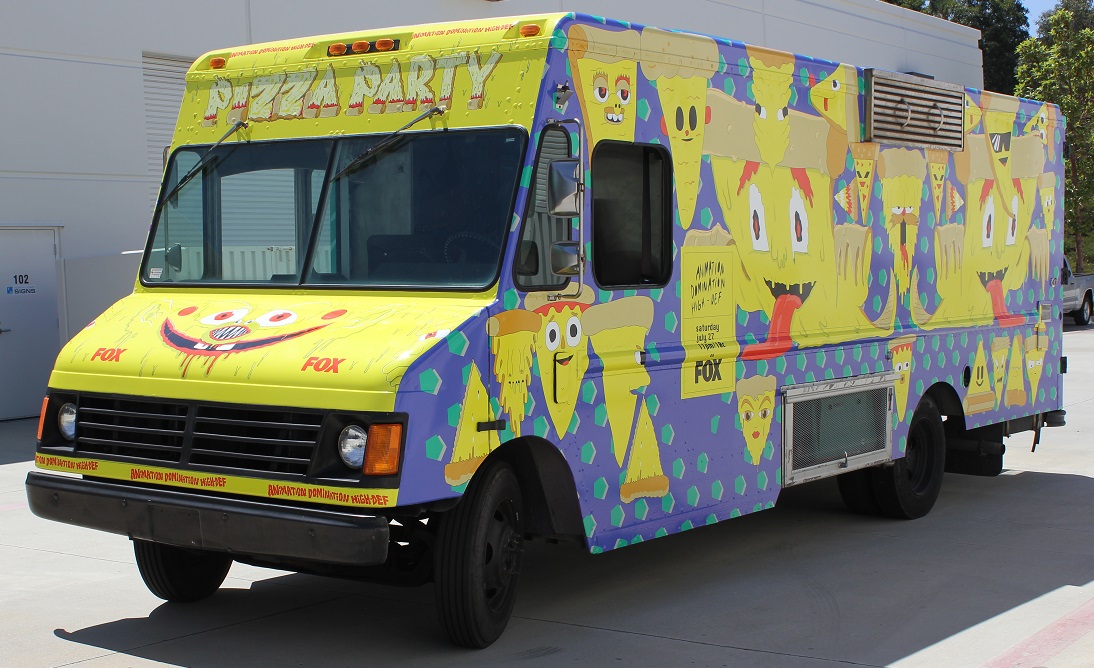 It’s not everyday when a pizza company calls us for an order.  We’re usually calling them!  So, when our local Flippin’ Pizza called, we knew they meant business.  They already had a fully wrapped catering truck, so the catch was they wanted a new wrap over their wrap temporarily, leaving the current wrap undamaged after final removal.

The reason they wanted a temporary wrap, to be removed after only 4 days, was they were attending the recent Comic-Con event in San Diego.   FOX ADHD contacted them because they wanted to use their pizza truck (catering truck), with their own wrap, to promote the Pizza Man comic and the Pizza Man characters.  Their plan was to wrap the pizza truck and have a ’pizza party,’ where they would be handing out free pizza to attendees of the Comic-Con event.

People from all over the nation travel to San Diego, CA, annually, to enjoy 4 days of comic super heroes and fun!  And free pizza! It’s a huge event with over 130,000 people in attendance.

For the wrap, we coordinated with Civic Entertainment, located in New York (who handles event publicity for FOX TV), and their design team, to create a truly eye-catching wrap.  As you can see in the photos, each side of the truck was designed with a different color and comic schematic, in a comic style.One challenge on this project was that as every side was different, we had to make it all flow together.  First we created a template of the truck from photos and measurements.  To get the artwork ready for the large format printer, we adjusted the artwork to be scalable to fit to a template.  The tricky part is printing out panels of printed material, and then tiling them together so they lined up, without obstructions of the vents on the truck.

Another challenge we had to be very careful to make sure we selected the right materials for a removable wrap, so that once it was removed it, there was not any (further) damage to the original wrap.  We consulted with 3M and selected a removable cast vinyl with cast over-laminate.

We wrapped on July 17 (just in time for the event), and removed it on July 22.   The adhesive held perfectly, and removed easily — just as we had hoped! — and the wrap underneath was preserved.  Both Flippin Pizza, and Fox were thrilled with the results!

At North Coast Signs, our expert designers and installers do amazing work.  If you need a removable truck wrap, or any wrap for a vehicle, or any other type of sign for your business, give us a call at 760-536-5454.

This site uses Akismet to reduce spam. Learn how your comment data is processed.

At North Coast Signs, we believe in being your one-stop-shop for all your signage needs

Whether you are re-branding, or starting out fresh,
let the North Coast Signs team help

Scroll Back to Top